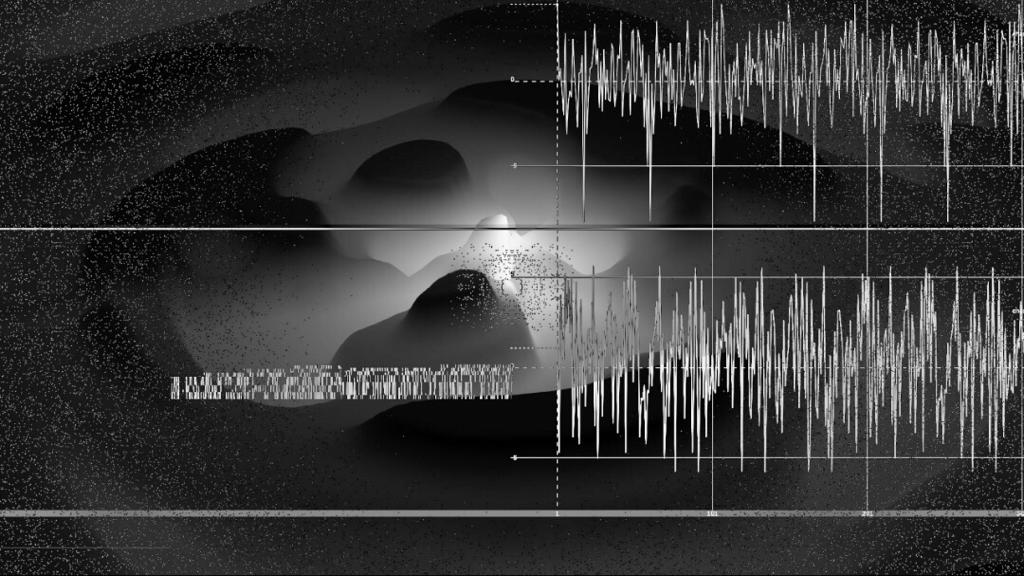 The artists of this video art believe that melancholy is an attempt to represent a shattered subject in dealing with the gigantic volume of the symbolic system. A giant of letters and symbols that try every day to shape and categorize subjects into predetermined models; A kind of distortion of reality that establishes a preconceived truth.

Melancholy is for Ashourioun and the owner of the time to escape from this category, from these letters. Melancholia is the inverted definition of reality by a schizophrenic subject. To achieve this, the angle of view from the neutral and observer character to the gaze of the inflamed subject has been changed; It is as if the audience is experiencing an abstract journey through the screen to the subject’s mind.

The artists of this video art believe that in melancholy, visual forms (made by Touch Designer) are narrators. Attempts have been made to associate these forms with the general states of several events as if they were distant memories that affected the subject’s mind, and today we recall only an overview of the visual state of those memories.

The Ashouriouns have tried to deform the elements to the point that they are moving on the border between the initial state and complete deformation; This movement and repetition of the elements, this crooked look at the objects will create a kind of distrust in the received affairs for the audience.

Erfan Ashourian is a digital media artist born in 1995 in Isfahan, Iran. Ashourioun is an artist who works in the field of composing and performing music using digital tools. Inspired by nature, organic forms, and phenomena, he shows the concept of decay in abstract forms.

For the Ashourioun, in the construction of joint projects, after the formation of the idea in general and the consideration of different points of view, plans are made separately on an aura of dialogues. Like disjointed lines, which then becomes a coherent poem with the composition related to the original form of the idea of ​​lines.

In this case, form and content become an integral element. The various spatial constructions, gaps, and vocal connections as represented in melancholy become a representation of this.

Mohammad Saheb Zamani was born in 1995 in Tehran. He has a bachelor’s degree in music and is a composer. His current focus is on electroacoustic music and experimental music. His main instrument, which he started playing at the age of 16, is the piano.

Ashourioun and Saheb Zamani believe that melancholy is somehow related to a kind of loss and loss of an object that has disappeared from one’s consciousness. This is also reflected in the poem in the piece; An expression with a dull, mournful tone, along with the melancholy whisper of a melancholy person, shows something extra that is absent in mourning: a remarkable decline in self-esteem, a massive impoverishment of the soul.

According to Ashourioun, if the final work is what was depicted before the idea was made, that pleasure of discovery and the ideas added along the way will be lost. Evolution is the effect of an instantaneous reaction on a prefabricated material. The stronger the material, the more difficult and complex the reactions will be.