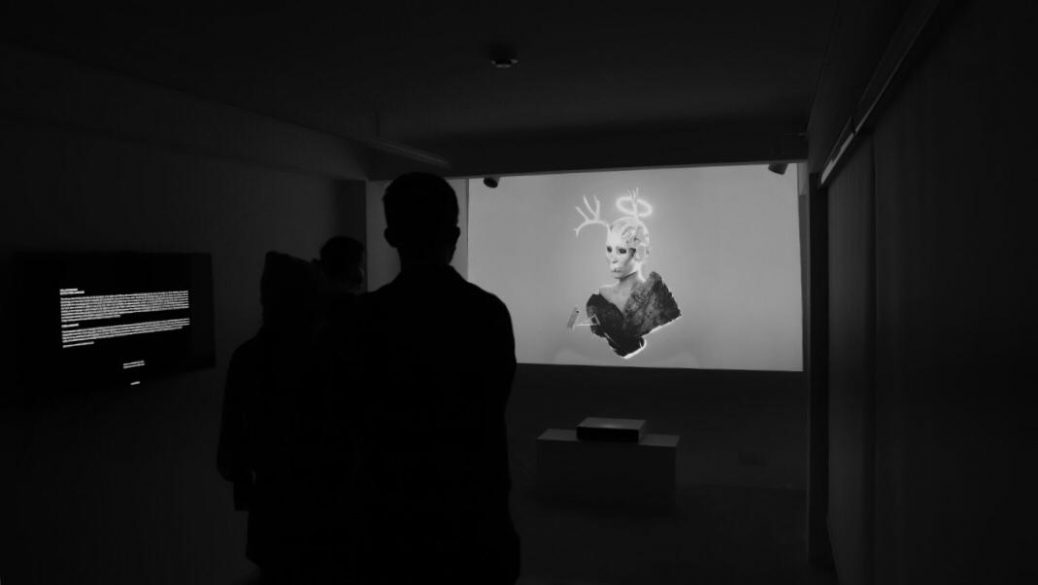 In the eighth week of the group exhibition “Glitch; Pixel Language »Platform 101, Shahab Shah Ali Video Art was screened under the title” Telecommunication “.

Telecommunication is defined as the transmission of information including word, image, video, and audio. In Shah Ali’s video art, the main subject is the volume, speed, and dispersion of information received by people during the day and night. In this work, firstly, the human and then the digital information is the main element.

Shah Ali states to Platform 101: “Today, such information is being transmitted every second, and the individual is in the midst of a multitude of such information. (Cyberspace and…) In this video, this information affects the character and the world around him in the form of noise. Some parts of it, such as the environment and the animals, have become trendy in this system attracting a lot of attention, which is shown in the video in the form of rocks, plants, and deer antlers. The aura above the character is reminiscent of the unique nature of man. “The CCTV camera at the bottom of the image refers to the system which controls all the information

Shahab Shah Ali (born in 1993 in Tehran, Iran) has a bachelor’s degree in cinema. He is specialized in directing, motion graphics, visual effects, and the new media. He has also been teaching digital art since 2015. He has collaborated in the annual Tehran Digital Art Exhibition (TADAEX) in 2017 and 2018 as an artist and a member of the executive team. Moreover, he Contributed to several exhibitions including the group exhibition of Nokhteh (NOXTE) in Mohsen Gallery the Tehran Contemporary Sounds exhibition in Berlin.

Shah Ali does not agree with the transfer of feeling in works of art, he believes that in this work, no attempt has been made to convey a feeling. It is only a depicted event that with his reading and gaze. The Internet and social media have been the source of inspiration for the artist to create this work, which he considers, a collective and global issue.

Glitch video art shown by Shahab Shah Ali in the form of a group exhibition “Glitch; Pixel Language “curated by Mohammad Ali Famori and Sadegh Majlesi in the space of 1- Bavan Gallery continued until Thursday, February 19, 2021.