The Execution of Lady Jane Grey 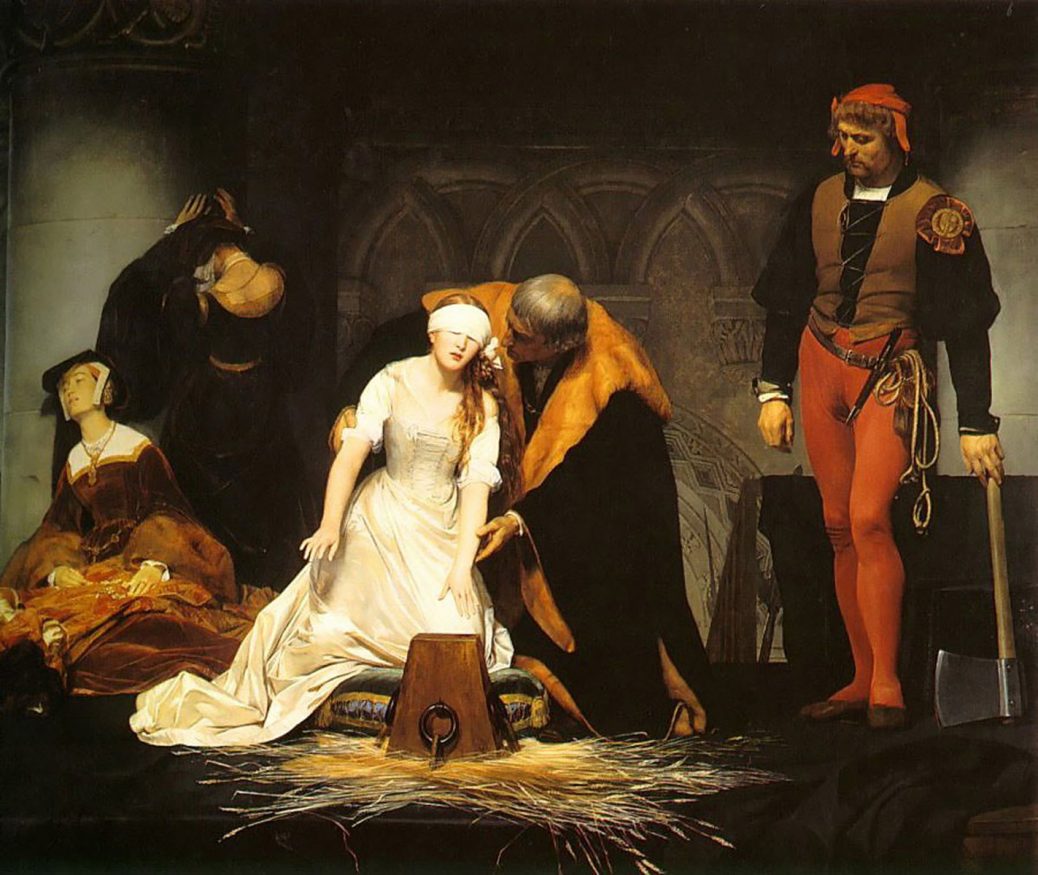 Paul Delaroche, ‘The Execution of Lady Jane Grey’, 1833
The French painter Paul Delaroche may not be so well known today, but at the Paris Salon of 1834 he was extremely successful with this large canvas, and it sold for a handsome sum.
Not surprising perhaps, considering it features everything that the French public of the 1830s most enjoyed: an emotionally appealing subject; an event from English 16th-century history that exploited the contemporary Anglomania; and a smooth and highly finished technique

The pretty young girl in the centre is Lady Jane Grey, the granddaughter of King Henry VII. In 1553, at the death of Edward VI, she was proclaimed Queen of England, aged only 17. A Protestant, she reigned for nine days, until the Roman Catholic supporters of Mary Tudor had her thrown into the Tower of London. She was executed on 12 February 1554.

In the painting, we see Lady Jane a few seconds before her death. As she kneels in her white satin petticoat, blindfolded, with her long, golden hair falling over her shoulder, she is the embodiment of fragility and vulnerability. Against a dark background enlivened with Romanesque arches, the five characters are poised for the final act. Delaroche has strongly brought out their emotions: one lady-in-waiting has fainted against a stout column, clutching Lady Jane’s dress and jewellery in her lap; the other has turned towards the column in a very dramatic pose, unable to bear the spectacle of her mistress’s execution. The Lieutenant of the Tower is compassionately supporting the prisoner, while the sad but stern executioner is prepared to do his duty.

Knowing his audience, Delaroche made some changes to the historical record to heighten the drama and make the scene more moving and pitiful: Lady Jane was in fact beheaded out of doors; she was not blindfolded, nor was she reduced to her petticoats; and her hair would have been pinned up. Viewers would have been reminded of another beheaded queen, much closer to them in time: Queen Marie-Antoinette, executed during the French Revolution, only 40 years earlier.