We are excited about a few things here. One, multi Juxtapoz cover artist Ron English is about to open a massive solo show, Neo Nature: We Are the New They, featuring 22 new paintings. Two, this said show is at a brand new downtown Los Angeles space for Corey Helford Gallery (571 South Anderson Street), which makes for an exciting new adventure for Southern California.

NeoNature examines the art of evolution, the flaw that propels civilization. The mutation of the ordinary stubbornly conjures new worlds.

Evolution is everything—wings flap and echoes trigger new means. It is intellectual communication. What is a butterfly pattern but a flamboyant yet fragile grab at the chance to spread the dust of its wings into new and larger worlds, a chance to seed before being consumed.

Ron English presents a monumental 22-piece collection which comprehensively aligns the angles of cognitive dissonance, squaring truth in opposing values. Finding visual equivalencies and mirroring patterns of disparate animals and eons, the artist makes the case for evolutionary alternatives, the random shifts of nature crossed with the unceasingly interventionist will of man, determined to kill and become his own Creator.

This new series of work was created throughout 2014 and into 2015 and reveals further progression by the artist into formally conceptualized views on the fluid nature of exponential change. The collage elements present in many of the pieces represent the multi-layering of process and materials. Beginning with sculpture, the artist crafted figures and set pieces, populating vast three dimensional environments, which were lit and photographed. The photographs then became the starting point for the oil paintings. 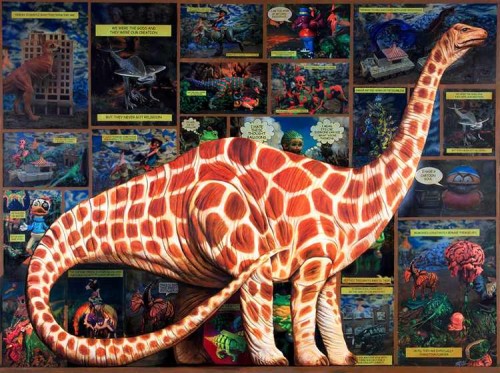 Photos and line drawings were captioned with the artist’s phrases, printed onto archival paper, collaged into the paintings and overpainted in old master style, becoming either graphic panels that illustrate the larger concept or background textural elements, layered like the legacy code of ancestors.

Juxtaposed with the dense environment pieces are bright, breathing portraits of neonatural creatures. Myth and history collide in the rhinocorn, a real animal poached nearly to extinction for its magical horn. The zelephant and the monarch elephant rule their respective continents, and in every iteration of the world, there is a giraffe, a beautiful lumbering long-necked creature that exists to be killed and eaten. Scientists conclude that Tyrannosaurus Rex did not in fact go extinct but instead evolved into the modern day chicken, a domestic food source for the ultimate tyrant king.

This is a story neither God nor Darwin would have written. Only an artist would have noticed that certain types of clouds connect heaven to earth, and leaves deepen color under this cloud cover, on trees exhaling like lungs. We are the genetic result of selective breeding for happiness rather than survival. Our superhero is no longer the strongman, but his conceiver, the writers and artists who elevate reptilian dreams, as the beasts of our evolutionary past tromp from forest to suburban treeline, convinced we are only their dream, yet compelled to peer into our windows.