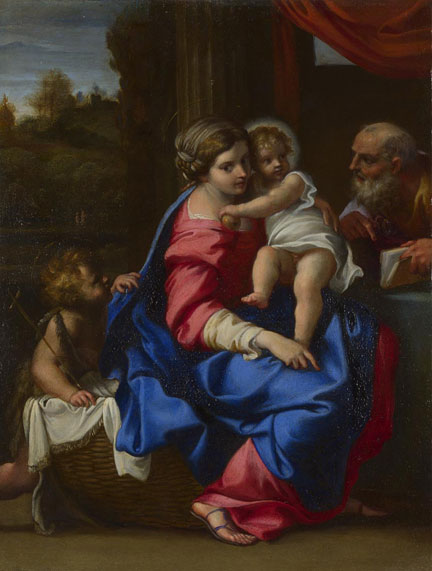 Carracci
Annibale Carracci, ‘The Holy Family with the Infant Saint John the Baptist (‘The Montalto Madonna’)’, about 1600
In 2004 the Gallery acquired Carracci’s Holy Family with the Infant Saint John the Baptist thanks to a number of donations and gifts in wills. This work was only discovered and attributed to Carracci in 2003 by our Curator of Italian and Spanish Paintings 1600–1800, Letizia Treves, who was working at Sotheby’s at the time. An export stop was placed on the painting after its sale at auction, allowing the National Gallery very little time to gather the necessary funds to save the painting for the nation. Thanks to the Gallery’s supporters, some of whom had left gifts in wills, the Gallery was able to secure the painting for the national collection. It is in circumstances such as these that the Gallery is so grateful for, and dependent upon, the generosity and foresight of its supporters.

Annibale Carracci, The Holy Family with the Infant Saint John the Baptist (‘The Montalto Madonna’), about 1600

Nearly a quarter of the Gallery’s paintings are on display thanks to gifts in wills. Read the stories behind the acquisition of some of the Gallery’s great paintings, and the individuals who helped to save them for the nation.

In this painting the Madonna seems about to rise to greet the viewer, as she balances her squirming baby on her lap, her wide-eyed gaze drawing us into the picture. Saint Joseph and the infant Saint John the Baptist respond to the lively child with focused attentiveness. The Madonna’s softly painted flesh and the Child’s plump forms, curly locks, and swirling drapery reveal the influence ofCorreggio. ‘The Montalto Madonna’ achieved great fame in the 17th century and was particularly praised by Bellori in his ‘Vite’ of 1672. It is one of the first paintings to apply an imposing Baroque composition to an intimately-scaled picture of the Madonna, its style having been established by Carracci in his fresco decorations for the Farnese Gallery, Rome, just before 1600.