Artist Caleb Brown is one of many brilliant painters featured in our new book, Juxtapoz Wild. Below, the artist describes the human relationship to animals in his paintings and shares his thoughts on our contemporary connection to the natural world. 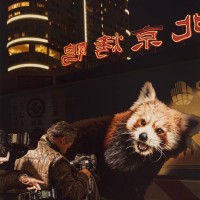 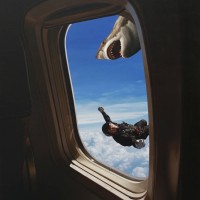 Caleb Brown: The animals in my paintings serve as proxies for the natural world as they appear distorted and displaced from their natural state, such as otters being the size of buildings, or sharks falling through the sky. They are positioned in opposition to the urban settings and human figures. Sometimes they’re pretty menacing, but even when they seem more benign, as in the Otter City paintings, they’re always at odds with the rest of the scene. In the Red Panda City paintings that I’ve been working on most recently, the animals, though large and imposing, are often being overwhelmed and alarmed by humans, while the people are interested but unafraid.

I have a theory that the Internet’s obsession with animals is a subconscious attempt to fill the void normally occupied by our natural relationship with them. Humans have, after all, evolved over millions of years alongside wild and domesticated animals, hunting them, fearing them, and forming symbiotic relationships with them. Now, for the first time, modern humankind is estranged from almost all of their natural relationships with animals, but they still preoccupy our minds in increasingly inexplicable ways. In my more recent paintings, the human figures are always photographing the animal components, reflecting this detached fascination.

check this article on juxtapoz.com