Of all the intriguing locations that Abandoned America creator Matthew Christopher has photographed, the New Castle Elks Lodge holds numerous visual elements that make the images truly captivating. Built in 1916, the New Castle Elks Lodge was a luxurious setting for its members who were primarily part of vaudeville and theater groups. There was a two lane bowling alley, a billiards parlor, and dance hall on the top floor. With a significantly lowered membership in the 1980’s, the Elks moved to smaller facilities, causing the building to eventually become city property and be demolished after 2011. Before its demolition, Christopher was able to document the crumbling interior that once embodied pomp and grandeur. He discovered the deteriorating heads of elks long since forgotten on the walls, an empty grand ballroom that once held impressive events, and a dust covered theatre where members and guests proudly performed. In his new book “Abandoned America: The Age of Consequences”, Christopher dedicates an entire chapter to the Elks Lodge, its story, and the photographs he was able to take there. 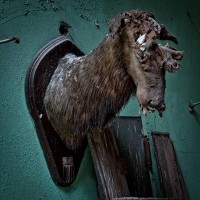 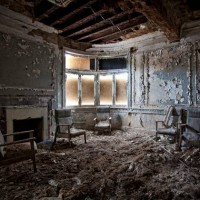 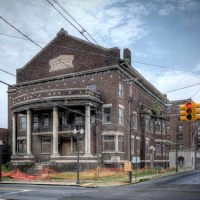