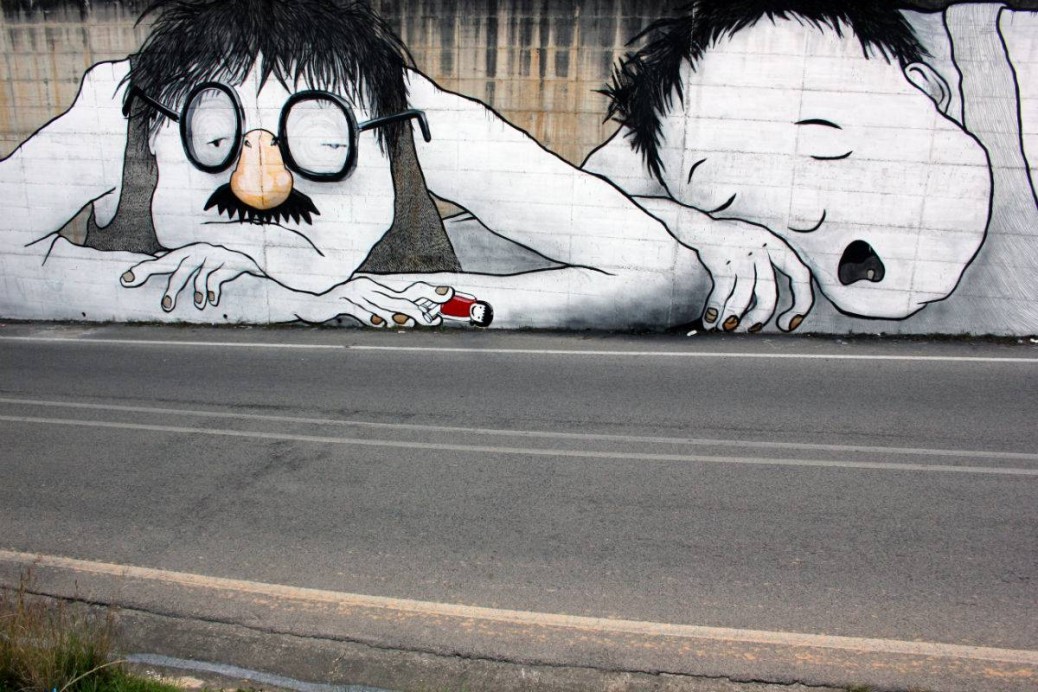 Ella & Pitr are from the the French town of Saint-Étienne. When this duo met, Pitr, serious and of dour demeanor, unrepentant tagger and graffiti artist, had been clandestinely hitting the city walls for close to a decade, and wondering where to take things next. One dark and stormy autumnal night, this solitary individual would pack his rucksack with cans and markers, alone, one last time. 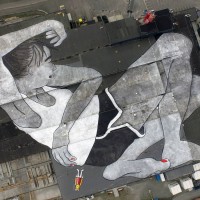 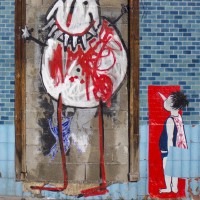 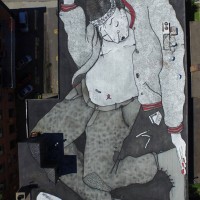 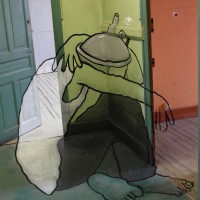 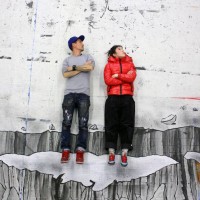 Kristin Farr: Tell me about the people you paint. Who are they and why are they so sleepy?
Ella & Pitr: They are often cramped in the square where they are sleeping, just like in their way of life. So, perhaps they are dreaming about another way to live. But also, we imagine that they could wake up sometime, and this idea is very awesome. There is an interesting tension for us because of that.

What questions do you ask with your artwork?
We are not sure how to translate our work into questions, but probably something like: “Are you happy like that?” or “We are very ludicrous, aren’t we?”

Why is subtlety important to you?
Because subtlety is what interests us about the human relation.

Do you have any crazy stories you can share from doing your massive outdoor projects?
Yes! You know there is an urban legend (sky legend) in Norway now? It seems that airplanes that fly from the airport of Stavanger now divert their path now to look at Lilith and Olaf.

What did you do right after you finished that piece, which was made during Nuart and set the record for the world’s largest mural?
We slept! But the day after, we began to get bored and have nothing to do, so, like drug addicts, we began to feel very bad and needed to paint new walls.

Tell me about the story of Lilith and Olaf. Why did you make the king so tiny? In reality, he was huge, but Lilith still dwarfed him.
Some people in Norway asked us to make a sort of tribute to Olaf Trygvason because he was born not far from the roof that we would paint, but when we did some research on the Internet, we discovered a very, very awful king from the tenth century who forced all Norwegian people to become Christian. If they refused, he tortured them and killed them. That’s why we found a kind of jubilation in transforming him into a ridiculous toy for Lilith. And Lilith was the first wife of Adam and refused to be under him when they made love, so she left home and some wings sprouted on her back. 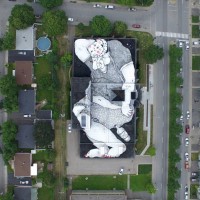 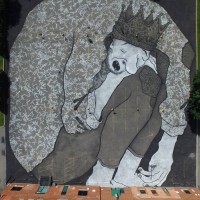 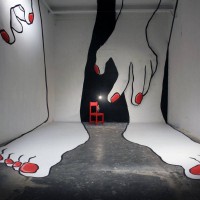 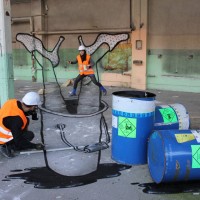 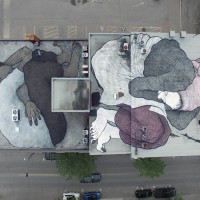 Why do you like painting on the roof?
Because it’s such good vibes there. You can speak with birds, and city noises sound different from there.

Describe the moment you met. Was it love at first sight?
According to people who were around us at this time, it was love at first sight, but we were totally dazzled so we didn’t notice anything. How could we draw and paste all night long and work all day long without tiredness if we weren’t in love? Love gives you some kind of magic power, you can move mountains with this fucking shit. It’s not very expensive and you can find it at every street corner.

What are each of your strengths that combine to make a super power?
Trust and sweet madness are our super powers.

You are two tiny people who make the biggest art in the world. Are you really human?
No, of course not! We are the brother and sister of Ant-Man. Everybody talks about Ant-Man, but not too much about his family.

Why do tiny ant people like making work that is ephemeral?
In order to not have time to be fed up. And because we don’t think a lot before doing a new piece, so we think that it doesn’t deserve to stay visible for a long time.

What are all the materials you use? Do you mostly wheat paste and only use paint if it’s a humongous piece like your new record-breaking production in Norway?
We can use everything that we find. We love trying to paint with many different things. One day, we made a small giant in Chile with only chalk and coal, and another one with only seaweed on a beach.

You also painted on snow! Did you use regular paint for that?
No, it was India ink with water. Probably less aggressive than the pesticides under the snow on the field.

How did the anamorphosis works start to happen? Was it a response to the ubiquitousness of selfies, since it was so inviting for people to pose with those pieces?
It was the idea to have a sort of portrait of our time, and play with our public that we can’t get in contact with normally. But it’s only a game, it’s not really like a part of our “work.”

Anamorphosis seems really tricky to draw. Do you use a projector?
No projector, never. Projectors are for people who don’t know how to draw, or cheaters. And most of the time, we do anamorphosis in abandoned places, so there is no power.

Tell me about the big rocks or pebbles you paint. Do they symbolize life?
We love them. We don’t really want to know exactly why we make them, but perhaps something about heaviness, or tension between silence and thunder. We painted more stones like that on billboards and museums.

How would you describe your sense of humor?
Humor is much too fragile to try to describe. We risk killing it if we try to describe it, right? Ridiculousness and human weakness makes us laugh a lot, like everybody.

Have your children influenced your work?
Yes, definitely! Sometime they ask us very good, moving questions. Sometime we absolutely copy them. But, before them, we were already very interested in children’s energy in drawings. So now we are bathing in kid’s drawings at home.

Are there any children’s book illustrations that have influenced your style?
Probably all books that we loved when we were children. And all exhibitions, movies and music, and many different things that we’ve experienced during our life, in fact.

Which of your dreams have already come true?
One time, we saw one of our colossuses from an airplane. It was when we left Santiago in Chile. But was it really one of our dreams? Maybe to build a very good and funny life with somebody else is a dream come true.

How does it feel to see your art from an airplane?
The feeling that, finally, the Earth is not so big.

Read more on this from juxtapoz